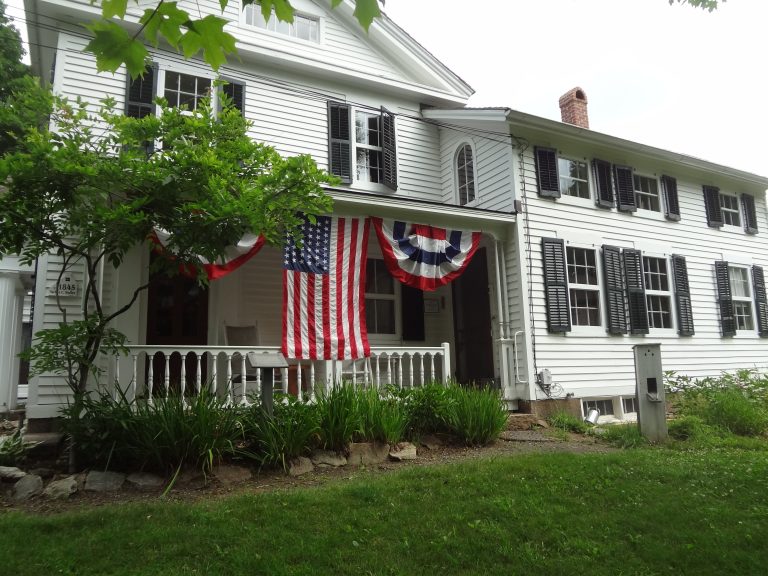 The Dudley Farm was built in 1845 by Erastus Dudley, a prosperous North Guilford farmer, gristmill and tannery owner. Today, the house, barns and surrounding ten picturesque acres occupy a portion of the land farmed by the Dudley family for almost 300 years.

Evolving into the Dudley Foundation

On October 10, 1994, the Dudley Foundation became incorporated, and the unforeseen and improbable journey to becoming a museum and destination began. Nobody saw it coming; North Guilfordites were in the dark about the details of the local landmark. The North Guilford Congregational Church and the North Guilford Volunteer Fire Company were both unsuspecting beneficiaries of David Dudley’s will. At the time, it seemed that the two entities would just be financial recipients of David’s estate after the real estate and contents were sold.

Realizing the unique character of The Dudley Farm, several long-time locals, primarily from the fire company, wondered if it would be possible to preserve this gem to make it a community resource. It required a lot of cooperation–the fire company supported the concept but did not wish to run the farm, and the church felt likewise but needed to protect the church’s interests. It was a daunting task, but numerous outside people and entities worked to make it happen. The Town of Guilford Probate Court, tasked with settling the estate, was a key partner in finding a way to achieve this goal. Attorney Bill Aniskovich went way over the top with the legalities of tax and incorporation matters, areas which were far beyond the capabilities of the rest of us involved.

From the outset there were many who pitched in, all bringing their own set of skills. Henry and Evelyn Tichy and Bob and Lorraine Ashman quickly became involved in the physical and clerical duties of a property desperately needing attention. Bill and Peggy Barnes and George and Linda Curry dedicated there time and talent to the Foundation’s success while enjoying the friendship of all involved. There are still people at the farm who started from day one; Bob and Jerri Guadagno, Don Homer, Janet and Mark Dudley, Doug Williamson, and Buster Scranton have all been around for a while. Those early days were busy and sometimes chaotic.

It hasn’t been easy. The buildings and grounds have been money pits, with sills and roofs, and everything in between, needing attention. We have managed to upgrade the electrical enough to keep the place from burning down, and nobody has to use the hand pump at the kitchen sink anymore. Best of all, the outhouse is no longer in use! Most everything (but not everything) is structurally sound now, and roof and painting projects will in the future be regularly scheduled events, not emergencies. A lot has happened, and it shows! Guilford Rotary reconstructed our Sugarhouse, so we now have a successful maple program in late winter. A Farmers’ Market has been established, reputed to be the second oldest one in Connecticut. The Dudley Farm String Band has faithfully provided event music for a number of years– what other market has that! The farm animals are a favorite attraction for all ages, thanks to the stewardship of the Dudley’s. Gardening, both for ambiance and food production, keeps the grounds good looking and productive. The museum is a step back to a different way of living, circa 1900.

These days, a lot is going on, the result of a vision and a lot of hard work. Our volunteers and our members continue to make it all possible. We hope you will enjoy your visit “down on the farm.”

Donations of any amount are gratefully accepted and are tax deductible.

Make a donation now The Dudley Foundation is a 501(c)(3) non-profit organization.

Begin your membership today! Select an option below and continue to PayPal.

Alternately, you can write a check payable to The Dudley Foundation and mail your contribution to: 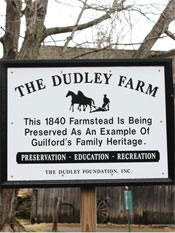 The Dudley Farm Museum welcomes volunteers to maintain the house and grounds, staff the office, plan activities and greet visitors. If you would be interested in contributing your talents and skills please contact the museum office by phone, mail or email.

Celebrate North Guilford’s history by becoming a docent. No previous background in history is required, just a passion for learning and sharing knowledge with visitors. Build relationships with people who share a common interest while becoming an active participant in the community, learning from local experts about the history of North Guilford and the surrounding region. Interested? Call or email us.